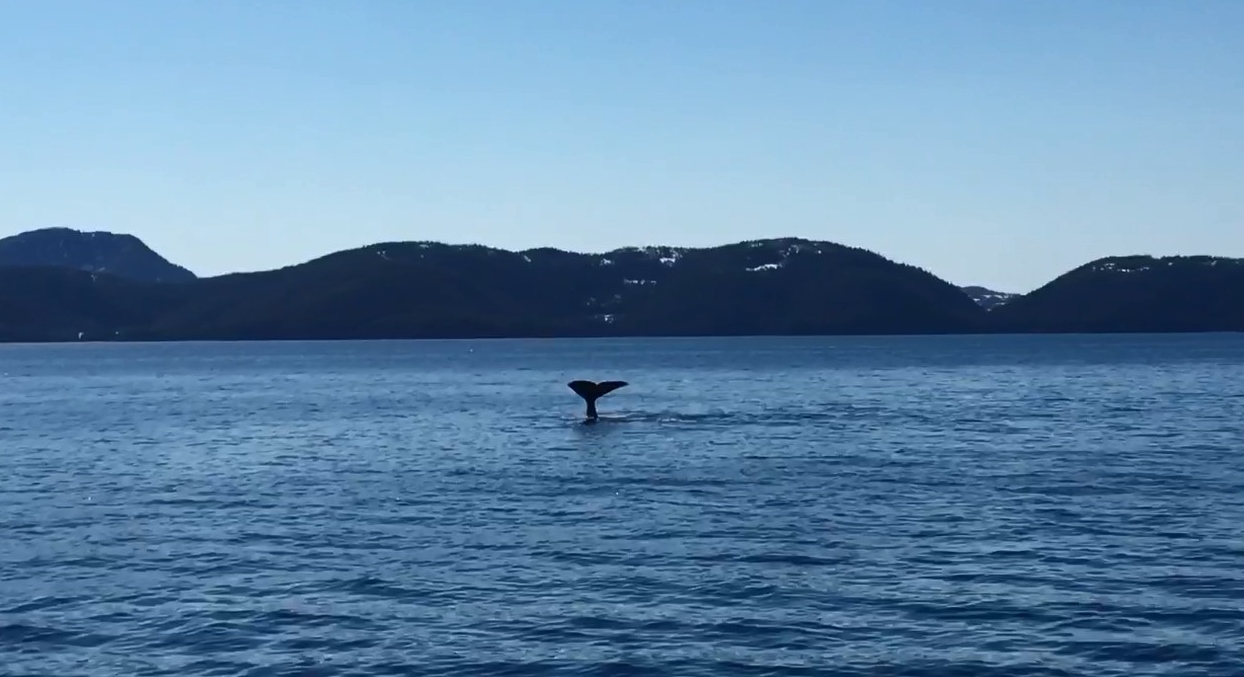 My dad tells people I work on a whaleboat.

I’ve tried correcting him. It’s a whale-watching boat, dad, I try to say, with glaciers as a bonus. Whaleboats operate off of antique whaling ships, and I don’t work on those either. I can promise that I have not hunted even a single whale, nor lived one chapter of Moby Dick. I just show flukes to people and share facts about that species. Point towards a blow. Take a picture. Go our separate ways.

He nods and smiles, then says the exact same thing the next week. I’ve given up trying.

Instead, each evening, I walk into the shared kitchen of my company housing in Seward,Alaska and ask after my coworker’s days. “Find any whales?” I ask, the question sloped like the breath of a sleeping dolphin, since I know this is a conversation I can have with only half of my brain. Yes, or no. Humpback, orca, fin, or maybe minke, with a differently-toned “ooooo” or “ooooh” for each. I nod, and flip my quesadilla. We measure our days in humpbacks, my coworkers and I, and our weeks in orca.

Our months are marked in bubble-net feeding or nursing calves, viewed from a non-intrusive distance. Anything other than that will startle me awake, make me burn my quesadilla to stories of fin whales breaching or transient orcas hunting sea lions. Whales are the markers of my summer in Alaska. They’re what I love and the moments for which I live.

They also buy me the groceries needed for that quesadilla.

On the water, whales become a necessity. I walk about the boat with my eyes glued to the water, laughing with passengers as I search the water behind their ears. Each trip on the non-whaleboats starts with an optimism as wide and translucent as a sparkling puddle, but on the rare trips, after a few miles miles without blows, I feel the tiniest pit in my stomach. As the miles go on it widens in time with the passenger’s quiet. I crane my neck backwards to look up at the mountains and cirque glaciers above, pointing them out to people and falling back into awe along the way, but the whales still announce their absence. I look into passenger’s eyes instead and see their slight impatience, dark with

the chance that they might not love this cruise, might not tell their friends, and might leave my next year’s quesadilla unbought. I take my lunch to the wheelhouse and scan the water, the pit growing. I don’t hunt for whales, but I do search for them for a living.

But then the blow comes, as always unexpected. I slip out onto the deck and there the whale rises at a distance, and I point my words and my energy towards her gleaming back. Once all eyes are directed towards the next blow I slide back and watch, because this is where the magic happens. Eyes go wide with awe, voices still and focus, and an entire deck forgets to breath. When a humpback rises through still water beneath the stark cliffs of the Kenai Fjords, words become useless. Air gains breadth. Beauty becomes moldable, colors as tactile as oil paints. The whale folds the world around her back. And all we can do is watch.

And then the humpback sounds, and we shake ourselves into language. In the smattering of words that follow I sense a feeling, wide as a whale unseen beneath the surface. That feeling is love. When I talk to passengers now I look them in the face, and I see in their eyes the love of the ocean that will follow them throughout their lives. Through each bill passed or opposed, through each plastic bottle bought or replaced, through every piece of trash tossed or held beside the ocean and for every moment of choice, the love that one humpback taught one person upon the Kenai Fjords will swim beneath both words and their actions. And that can change the world.

I am glad above all else that I love in a world where people make money from whales. Because I can earn five quesadillas a week and winter travel money from a summer of working on boats in Alaska, I handle the lines that send a boatful of people from around the world out into the waters where they’ll come to love and then to protect. Major Marine Tours, the company for which I work, functions as a profitable business, but because the owner has had a lifetime of coming to love this place and this environment that money goes through the Seward Sealife Center and the Seward Middle School to circle right back into helping the community love the wildlife.

I want to end with a story. Early this season I saw a whale almost unheard of in these waters: a sperm whale. We saw the blow from a distance, and I almost didn’t believe it

when I saw that sideways-slanted blow catching the sunlight. Sperm whales were one of the most famously hunted whales in commercial whaling days, with select solo males such as this one serving as the inspiration for Moby Dick, and their history with humans reads as the twinning of violence and industry. Sailor’s tack came bought with the blood of sperm whales. They are also one of the deepest-diving whales, perfectly adapted to the cold squeeze of deep water. To see a sperm whale is to see an alien, a creature from a world only imagination can reach.

I stood on the bow in the sun, wrapped in awe. Sunlight caught on the back of a whale who fed in perpetual night, and it was the same light that, for the moment, I shared. The whale breathed out; I breathed in. From a respectful distance I watched him gather his strength for the deadweight drop to the bottom of the ocean, and then he dipped below the water. His back rose in a mound, and then his fluke lifted gently from the surface of the water, as his body rolled straight and the blades of his fluke floated upwards into the sun. Then, slowly, he sank, until only the tips of his fluke were visible, and then nothing but the lit surface of deep water.

I wandered through the boat, struck with wonder. I rattled off facts to passengers, describing the organ in his head encasing the spermaceti oil whalers found so rich, but which served the more valuable purpose of helping him sink and rise in deep waters. I told them about ambergris, the potent-smelling substance that forms the base of the most valuable perfumes in the world, but which has the far better appeal of being the substance the sperm whale uses to protect his stomach from the sharp beaks of the giant squid that form his prey. I took apart the anatomy of the whale we had just seen and produced stories instead of lamp oil. And I watched the glow of new knowledge on new faces as we looked down into the sperm whale’s realm.

And this is what I live off of: not oil, but awe. The product I present is love, pure and simple – the love of knowing an animal with immense power swims beneath your feet, in a world you can never know. With such richness of life below, respect comes as naturally as the squeeze for oxygen in the lungs of a surfacing whale. Care surfaces, plumed like a blow. And each day in what isn’t a whaleboat leaves everyone onboard rich, our eyes aglow with the love of whales that lights our world as naturally as sunlight on Alaskan seas.

Tamara Lang is a senior deckhand with Major Marine Tours in Seward, Alaska, and a writer of creative nonfiction. Her writing and her travels can both can be followed on facebook at Tamara Lang Writes, or at tamaralang.com.