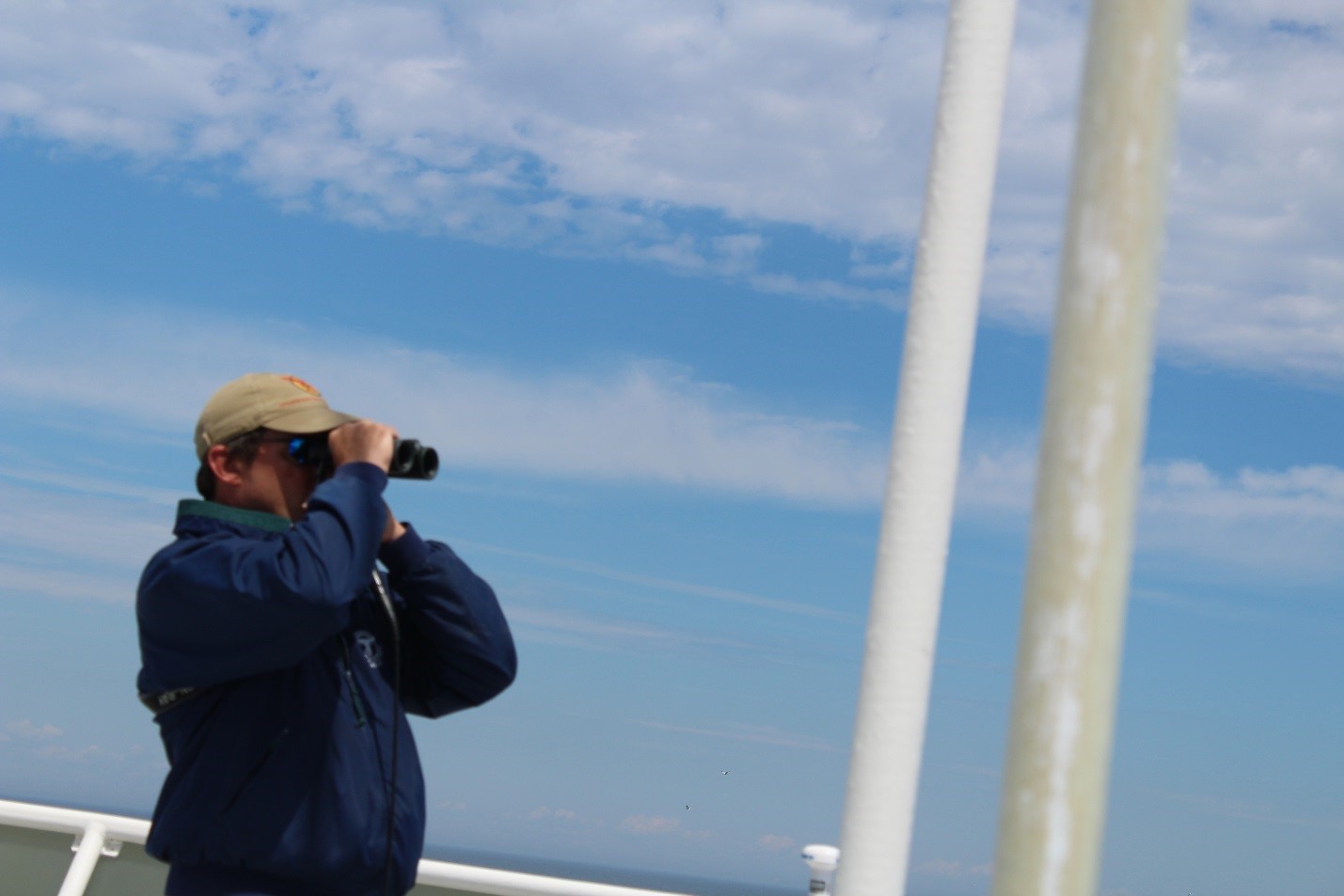 A Day on Stellwagen Bank: Where Whale Watching Was Born.

On a partly-cloudy June morning, nearly three hundred passengers boarded the Hyannis Whale Watcher cruise. Prepped with backpacks, coolers, and extra layers for the chilly Cape Cod winds, the passengers seemed hopeful as they handed their tickets to none other than the naturalist, Jonathan Brink.

Jon Brink has been with Hyannis Whale Watcher for 14 years, but has been in the industry for longer.  Along with Captain Mike, with over 30 years of experience, it is safe to say that these guys know their whales.

They first took us to an area off Stellwagen Bank informally known as “Finback Alley.” But what we actually found at first were a bunch of minke whales!

The minkes were quick.  The crowd got a really good look at one in particular, which surfaced just off the port side of the boat.  It was then that I noticed the “minke mittens,” or the distinctive white patch on their pectoral fins.

While we were with the minkes, we saw not one, but two very tall spouts in the distance. These were the blows of finback whales.  I learned that it was special to find two fin whales together, as the crew had typically seen them feeding alone.   When they are observed close together and synchronized in their movements, an “association” has formed.   I heard this from the intern on board, Melissa Steinberg, who collects data and photos for Whale and Dolphin Conservation.

It was Melissa who spotted the next whale.  After traveling to the southwest corner of Stellwagen Bank, near Provincetown, the boat was quietly anticipating the next sighting. It started to feel like our luck ran out, but then Melissa saw a spout in the corner of her eye.  Captain Mike took us closer to the area, but we still had to wait a few more minutes until we saw yet another species of whale – a humpback!

Everybody loves to spot a humpback on a whale watch tour.  This one did not disappoint.  Though we were running out of time, we were able to observe the whale for a little while. It even showed us its fluke!

Jon told the crowd that we were probably the only tour on the Cape to find a humpback today.  All the naturalists in the area know each other well and communicate often, in order to coordinate whale watching. In fact, these Cape Cod companies pretty much wrote the book on the whale watching industry as they worked collaboratively with NOAA to develop the measures and protocols now included in the Greater Atlantic Regional Whale Watching Guidelines.

This naturally fits the values of Whale SENSE, a program that recognizes responsible tours. Whale watch companies volunteer to participate in this annual training.  They agree to follow regional guidelines and regulations, educate passengers, notify officials of whales in distress, set an example for others and encourage ocean stewardship.  Hyannis Whale Watcher was the second company to join the program in 2009, after Dolphin Fleet in Provincetown.

It is clear that Hyannis Whale Watcher is proud to be a part of this program.  Jon said it was a mutual decision for the company to join, as they mostly wanted to set an example for other vessels. While the whale watch companies in the area are all well aware of the guidelines, recreational boaters might differ.  This is why Jon incorporates information about Whale SENSE in his narration.

“Think of the threats they face as raindrops. Giving them protection is like giving them an umbrella. If you give whales protection, it’s a big umbrella, and everything else fits in underneath.”

This is great reminder that all species—from seabirds to sharks to whales—rely on us to keep the oceans clean.  Conservation is only successful when people work together to do our part. Getting out on a responsible whale watch is certainly a great way to respect wildlife and support conservation, but it is important to remember that we can all be responsible stewards for the environment at any time.