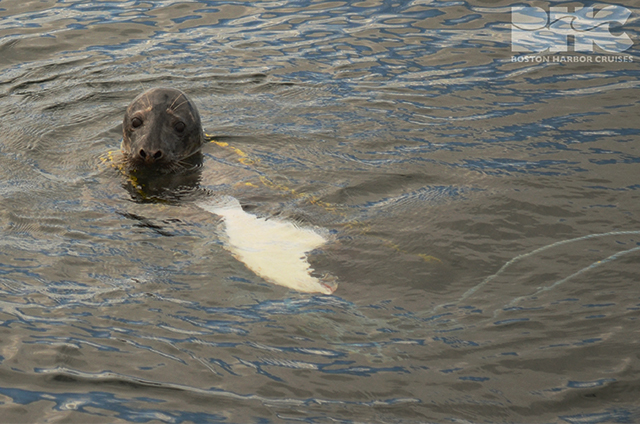 It was a beautiful day out not on Stellwagen Bank but as we called it “south of south”. We headed out towards the south on board the Sanctuary for the 10am whale watch and after spotting a quartet of fin whales on the southwest corner of Stellwagen we headed around the tip of Cape Cod and down to an area off the beaches where we found a scattering of humpback whales. We spent time with two “little” humpbacks, Shuffleboard’s 2015 calf and another whale which was first spotted in the area back in 2015. Both whales were diving deep and appeared to be feeding on areas of bait that sometimes roiled up to the surface. This early in the season many of the whales are just returning to the area to begin their summer feast. Both whales are looking a little skinny and appear to have some dimply skin going on – calves often have “bad skin” so maybe this continues on into the juvenile years. We often compare whales to humans in terms of their life spans and parental care. Maybe they also have acne!

For the 2:30 whale watch we headed down to the Cape Cod beaches in search of the whales again. The area is once again a hive of activity. On the way out we spotted two basking sharks, around twelve grey and harbor seals, tons of seabirds and our two fantastic juvenile humpback whales. The whales turned out to be sleepy this afternoon, perhaps after a morning of heavy feeding. One thing we noticed and we moved through the area was the enormous number of lobster pots. Entanglement in fishing gear is a major threat to a number of marine animals, especially our large whales. 70% of humpback whales in the Gulf of Maine and 83% of North Atlantic right whales bear scars from entanglement and between 10% and 25% of our humpback whales will gain new scars every year. This is an enormous issue that needs everyone from fishermen to researchers to legislators to work together to find solutions that will protect the whales and allow our local economy to flourish. Unfortunately this threat was brought home to our passengers when we spotted a seal that seemed to be acting strangely. After investigating we noticed a yellow line around the seal’s neck and a further blue line trailing around it. Researchers grey seals typically see between 3-9% of seals entangled at any given haul out. These seals typically become entangled at a young age will grow “into” the entanglement causing major injuries as the lines become tighter. Rescuers have had some successes in disentangling seals by sedating them remotely. Hopefully this little seal will get resighted and hopefully disentangled. It’s hard to see the impacts that we have on these animals first hand but it is important to reminded from time to time that we have to continue working to find solutions to protect our marine ecosystem.