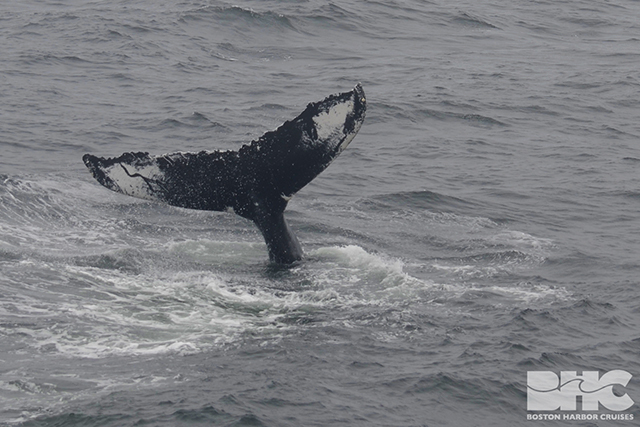 Field Notes: Out Of the Fog

We headed out into the thick fog surrounding Boston with hopes that sightings luck would continue to be on our side. While exiting the harbor the crew kept a sharp lookout for other boat traffic, but before too long we were able to shift our focus to spotting whales. There was just enough of a breeze to sweep the fog away to give us about almost a mile of visibility, and before long Chrissy spotted the first blow of the day, followed by a pair of humpbacks nearby. We focused our attention toward Nile and Lynx, who were doing some slow traveling. Passengers had just gotten the hang of spotting the whales as they resurfaced when Nile shocked us coming up right along the port side and then lob tailing just yards away from the boat.

I was warning passengers that the whales could come up anywhere and asking for help to resight them so as not to miss the whales and lose them in the fog. Shortly after, I heard a shout from the stern and sure enough, the whales had come up behind us and were swimming away. Just as everyone’s eyes were turned, Nile gave a huge tail breach! We followed them as they maneuvered in more of a linear fashion.

From the fog emerged an enormous cargo ship, and we felt a bit of a pit in our stomachs as the humpbacks swam in the direction of the shipping lanes. Luckily we were able to stay with them long enough that we could see they were not in the ship’s path, however it was a stark reminder that the oceans and their inhabitants are under constant siege from anthropogenic threats. The conversations I had with passengers on the way home gave me hope- while we cannot eliminate every risk, we can contribute to bigger solutions such as plastic bag bans, reducing waste of goods and energy, and fostering an overall shift in our attitude away from fast consumerism. It was such a treat to be enclosed on foggy Stellwagen Bank in the company of Lynx, Nile, and the other critters we enjoy watching so much.