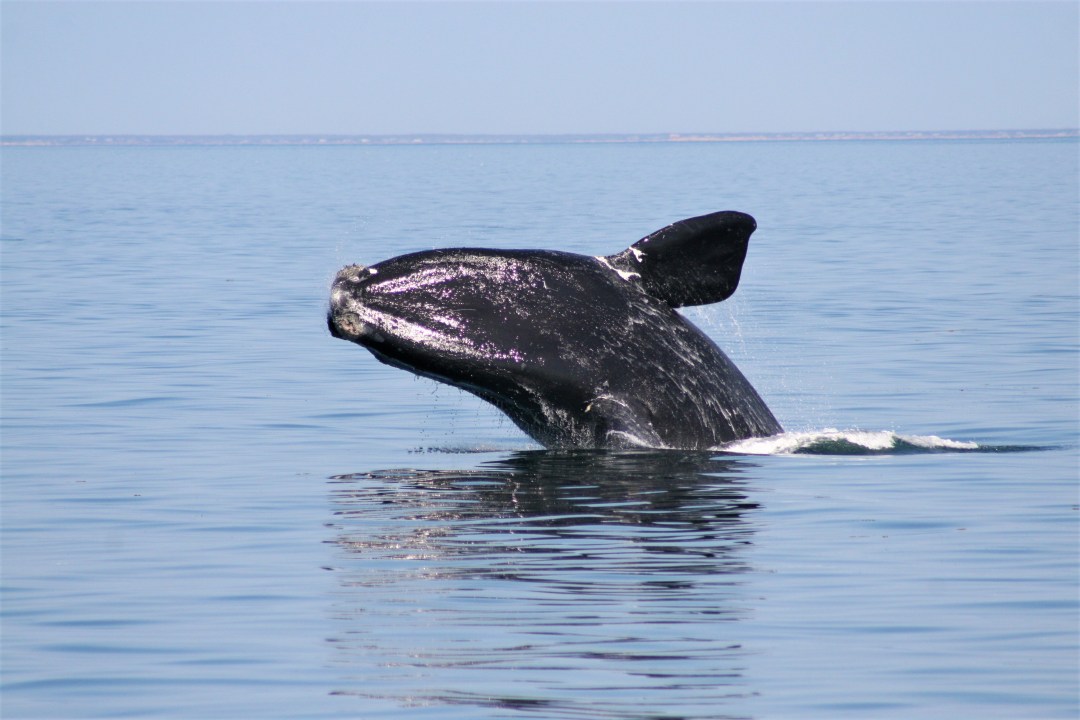 How do you identify a North Atlantic Right Whale?

First, where does one go to encounter these whales? North Atlantic right whales are exactly where their name states, the North Atlantic ocean. Being found in the coastal waters of New England, these whales can range from Canada, offshore and when expecting a calf, waters between South Carolina-Florida. Although they wander close to shore (they are nicknamed the “urban whale”), many by passers will go without ever witnessing these magnificent creatures in their lifetimes. This is due in part to the fact that there are less than 400 North Atlantic right whales in existence.

Why is their population so low?

North Atlantic right whales were one of the primary victims of whaling and were brought borderline to extinction in the early 1900s. They were the perfect target for whale hunters due to their lack of speed and because they did not sink to the bottom of the ocean once they were attacked – their thick blubber layer helps them float. Therefore this made those who hunted them appreciate that their body was easier to retrieve and made them primary targets, hence the name “right” whale. Unfortunately, despite commercial whaling no longer being legal in many countries, these whales are still not safe from harm. Many of the threats they face today are still very prevalent and continue to be due to the actions and behavior of human activities. These whales face many challenges like environmental changes, vessel strikes, entanglements and more. With chronic stress and negative encounters, female North Atlantic right whales have been producing fewer  calves than normal and due to the long process of raising one and recovering afterwards, the population has not seen significant growth.

As a result of their population numbers decreasing, it is vital to keep track of their travels in order to have a better understanding of their health status and habitat use. Below we’ll break down how we identify them as a species and then as individuals.

North Atlantic right whales are quite unique because they do not have dorsal fins like other baleen whales. They have thick black bodies (some white patches on their bellies), produce a “V” shaped blow (exhale) and have a smooth trailing edge on their flukes. Their dramatic mouth shape is a unique trademark of theirs and their head makes up a big portion of their body. These right whales can weigh up to 140,000 lbs and reach lengths to an incredible 52 feet.

How can you tell the right whales apart?

Identifying right whales can be quite the challenge due to the fact that vessels are required to keep a distance of 500 yards (1,500 feet) in US waters. The photo above gives a good example of what a right whale might look like from this distance. Researchers working with North Atlantic right whales typically have federal permits to approach more closely and collect their data. If you happen to have a powerful zoom lens and get a better photograph, what researchers look for are specific white markings on the whales’ face and head.

As seen above, North Atlantic right whales have these unique patterns (called callosities) that are perfect for the purpose of identification. Callosities are essentially patches of tissue on their bodies that are dark but appear to be white markings from afar because they are actually covered in tiny crustaceans. These crustaceans are known as cyamids or, “whale lice”, and when on the whale, they make the tissue patches much more vibrant, making it easier to make out their shapes. Those shapes are what separate right whales from each other, as they create unique patterns on each whale, and usually begin to become prominent once they are seven to ten months old.

Photographs are taken annually of every whale possible for the main purpose of tracking the wellbeing of the whale. Questions that need to be under consideration are: what parts of the whale have changed and what occurrences could have caused this? This technique is most successful when observing a vessel strike a whale and trying to estimate how much time had passed since the incident occurred. It is a way to discover a timeline of the incident and determine what their health status may be.

Although it may seem simple, recognizing patterns and differences on every right whale can be  a tedious task. You can check out the North Atlantic right whale catalog, curated by the New England Aquarium, and get an idea of what it takes in order to identify each whale:

Samantha is currently an Intern at the Whale and Dolphin Conservation. She is studying Environmental Studies and Biology at SJSU.

This site uses Akismet to reduce spam. Learn how your comment data is processed.