Field Notes: Cape May Whale Watch & Research Center Wants to Know If YOU have Whale SENSE!

Reposted with permission from Cape May Whale Watch and Research Center. Original blog post can be found here. 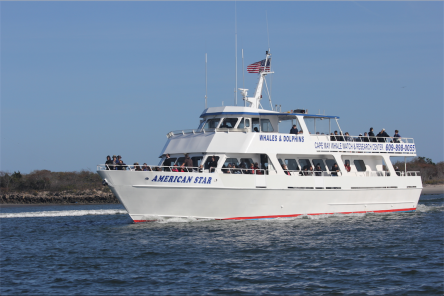 Do You Have Whale SENSE?

As the years progress, the use of the oceans for recreational purposes has increased dramatically, leading to a greater number of people living near the ocean, traveling to the ocean, and using recreational boats throughout our oceans. Many don’t realize that, although jet skiing, parasailing, and fishing are all great entertainment activities used at the beaches, every extra boat that is in the waters has an impact on the marine mammals that inhabit those waters. The interest in the marine mammals encountered in the oceans has led to the increase in commercial whale watching vessels as well. However, many of these commercial whale watching vessels, unlike the recreational boats, follow guidelines on how to minimize the disturbances to the whales. Such guidelines include coordinating times with other vessels, slowing speeds as they approach, approaching whales from the side or behind and parallel to the animal’s course, speed and direction, never approaching within 100 feet of whales, and limiting the time spent with an individual whale. As part of the Cape May Whale Watch and Research Center Vessel, I, as well as every captain, naturalist, and intern have been trained through Whale SENSE. This is a term that is frequently stated on each of the whale watching tours but what exactly does it mean? Whale SENSE is a voluntary program that trains the crew of the vessel on the laws, guidelines, and species behaviors that are important in providing responsible whale watching tours. The focus of Whale SENSE is to; Stick to NOAA’s whale watching guidelines,Educate naturalists, captains, and passengers of the whale protection laws and guidelines, Notify appropriate networks of whales in distress, Set example for other boaters, and Encourage ocean stewardship. 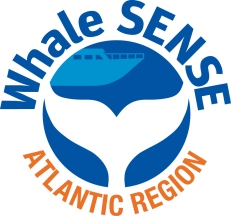 So why is Whale SENSE so important while maneuvering throughout the ocean? Many people have heard that with the increase of boats in the ocean, the noise in the ocean has also increased. This affects the ability of marine mammals to communicate with one another as well as the health and well-being of the mammals. Even just a small boat traveling at 5 knots in shallow water has been shown to reduce the communication range of bottlenose dolphins within 50 meters by 26 percent and this only increases with boats moving at faster speeds (Prideaux 2012). What is not as common of knowledge is that many times whales and dolphins are unable to avoid the ships thus leading to collisions, many of which go unnoticed. The number of deaths from these collisions is far higher that what the figures suggest based upon the fact that so many collisions are unnoticed or not reported. (http://us.whales.org/issues/boat-traffic).

Unlike the commercial whale watching vessels that have restrictions, schedules, and are many times trained through a program such as Whale SENSE, recreational boats are not capped, coordinated, or restricted to a schedule and each individual boat can cause harm to the whale and dolphin community as a whole. Even if there are no collisions involved, forcing the animals away from an area can also have significant consequences. By avoiding a boat or being forced from that habitat, individual animals may be forced to make energetic trade-offs or shift their tactics to cope with the disturbance which can affect their energy demands, or their metabolic rate and use of energy reserves. Especially if the mammals were feeding and were forced to leave the area, thus losing their energy source and using more energy to avoid the disturbance. In some instances the disturbance forces the mammals to abandon places that have been important for feeding, breeding, or resting and in the instances that the mammals remain, the regular harassment of boat traffic can decrease their fitness and reproductive success (Prideaux 2012).  In short, disturbance from boats turn the attention of whales and dolphins away from essential activities such as foraging, breeding, socializing, and feeding in order to focus on avoiding the boats (http://wildwhales.org/conservation/threats/boat-disturbance/). It has been found that in many instances, the boat avoidance behaviors used by the whales and dolphins are the same as those used to get away from predators (Prideaux 2012). It is important to recognize the impact that these boats have on such incredible creatures so that guidelines can be followed and precautions taken in order to protect them and their habitat.

On the American Star of the Cape May Whale Watch Research Center, many of the natural behaviors of the whales and dolphins have been observed. We have seen the bottlenose dolphins feeding, mating, and socializing which has been an incredible opportunity. The reason we are able to view these dolphins in their habitat performing such natural behaviors is that we take caution in approaching and viewing them. By following the Whale SENSE guidelines, we can approach the dolphins with such care as to not disturb their natural behaviors. Taking these precautions allow one to observe the beauty of these creatures while respecting the habitat that they live in. This can ensure that the mammals return to the place that they know is safe for them feed, mate, and give birth in order for us to continue our research and observations of their natural behaviors. It is important for everyone that enjoys the beauty and recreation of the oceans to understand that we are entering a habitat that belongs to the whales and dolphins and therefore need to respect the individuals and their environment. So next time you are on a boat, ask yourself, do you have Whale SENSE? 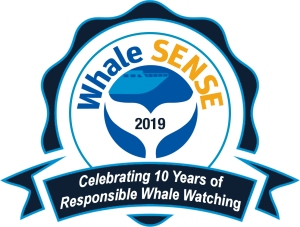